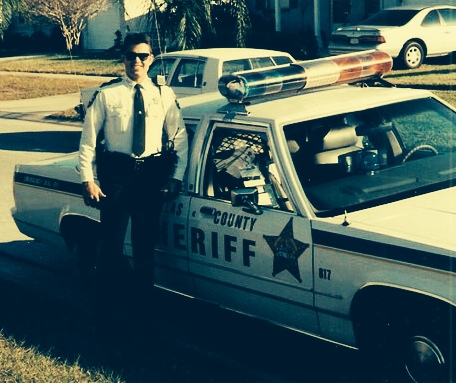 The Citizen, the Centurion, and the Sword

Your attacker doesn’t need to see the whites of your eyes in order to kill you—he only needs to accurately predict where you are, or where you are going to be.

During my career as a police officer in the Tampa Bay area, spanning seventeen years, this, and other truths of combat were literally grafted into my psyche until they were as natural as breathing. In order to be effective, they must be intellectually understood, and then absorbed as muscle memory. In the heat of battle, contemplative reflection is greatly discouraged.

Police officers will ordinarily unholster their weapon hundreds of times, for a variety of reasons during the course of a twenty or twenty-five year career. And, yet, the great majority of them will never pull the trigger. This is a testament to the professionalism of today’s modern police officer.

Assailants of average height and weight, armed with an edged weapon, can cover a gap of twenty-one feet in approximately 1.5 seconds. It takes the average officer longer than that to draw their weapon from the holster, accurately fire, and neutralize that threat. In the real world, officer survival is literally measured in milliseconds. Action is always faster than reaction, which leaves even the best officer playing catch up much of the time.

Thus far in 2014, according to the Officer Down Memorial Page, there have been 29 police officers slain by gunfire alone. At the time of this writing, that represents an increase of 53% over the same time last year. It is only the grace of God, and the provision of modern tactics, and protective gear that prevents this figure from being higher.

It goes without saying that recent events in Ferguson and St. Louis, MO., provide the backdrop against which I write. Much has been said about these two cases, both of which represent the tragedy of the human condition. I write as a former police officer that served in various high-risk capacities, to include that of SWAT Operator, Sniper, K9 Handler, and a State of Florida Firearms Instructor. In 1997, I was awarded my agency’s Combat Cross, for my part in exercising my lawful deadly force option against a man armed with a rifle. We exchanged gunfire. He went to jail, and by God’s grace, I went home.

I also write as a pastor and follower of Christ, who is deeply concerned about the pre-existing emotion and brokenness revealed by these scenarios. I have walked the hallways of the police departments. I have patrolled the streets of high crime neighborhoods. Reflecting back, I can confirm the presence of sin and human despair in both venues.

It is only by God’s grace that when these two worlds collide, day in, and day out, that the results are far more often than not peaceful, and serve the common good.

With a desire to balance these two roles, one past and one present, it is not my aim here to debate the emotion of Ferguson and St. Louis, nor to deny the critical importance of dialogue concerning race relations, or systemic injustice in America. That discussion may be concomitant to my topic here, but is best treated separately.

I want to bring to light a number of factual, tactical, combat matters that are not well understood outside of law enforcement circles. Often times, when emotions are indeed running high, they are dismissed out of hand, or with a flippant, “Oh, sure, we know, policing is dangerous.” Without an understanding of these issues, there can be no accurate, or helpful dialogue about the specifics of any of these high profile cases.

Those who do not desire to understand combat tactics do not actually desire to know the answer to the question, “Why did the officer have to…?”

Here are two graphic videos, easily accessed via the Internet, illustrating the reality that every police officer faces, namely, that their next citizen contact may turn into just such an encounter. The races of the involved parties are immaterial. Race does not kill police officers—hands kill police officers.

In this video, an “unarmed” large man ambushes a much smaller female officer, mercilessly beating her with his bare hands. That he did not take her weapon and execute her is a matter of God’s grace. Other officers have not been as fortunate. Among other tactical considerations in this case is what experts call officer/subject size factors. Police officers are trained in defensive tactics, but they are not superheroes, and they cannot defy the laws of nature. Only intentional, even aggressive tactics will ensure survival. Here, an otherwise large man easily overwhelmed the much smaller officer.

In this video, a previously “unarmed” man attacks a police officer, pins him with his own weight against a vehicle, and succeeds at disarming the officer’s baton. Watch as the officer, in a fight for his life, struggles to unholster his firearm, and deliver accurate shots to the violent suspect. What took just seconds in reality, feels like minutes to the officer, as he experiences tunnel vision, and auditory exclusion. Here, the suspect continues fighting, even after being hit multiple times. This speaks to the necessity of multiple shots delivered in combat, as well as the fictitious nature of Hollywood officers intentionally shooting suspects in the arms or legs.

Contrary to popular opinion, police officers are not trained to “shoot to kill.” They are trained to shoot at center mass, to fire for effect, and to shoot until the threat is neutralized. If a suspect survives the encounter, he will be treated medically for his wounds, and brought before the court for his alleged crimes.

As to an officer’s decision to use deadly force, versus a non-lethal option, such as a TASER, it must be said that: 1) Only in the most controlled environment can an officer safely deploy non-lethal force against a potentially deadly threat (i.e. never bring a knife to a gun fight), 2) Deploying non-lethal force against a potentially lethal suspect where lethal force is not on stand-by, is a deadly game that exposes the officer and bystanders to great risk, and 3) While TASERs have proven extremely effective, they do fail, and when they fail, the officer may not have time to transition to another weapon, which can be fatal in a lethal encounter.

Those unfamiliar with these realities will usually concede to their tragic nature. The disconnect, however, is that the unfamiliar often fail to recognize that no police officer must wait until a scenario has spiraled out of control, and fight for their life before taking decisive, and sometimes, even deadly force action.

Police officers are never expected to surrender the upper hand in combat, and then fight to regain it in order to justify their force decisions. In fact, when a police officer exercises their objectively reasonable deadly force option, it can be rightly said that it is the suspect who makes the decision for the officer.

How do we as a civilized society, under color of law, determine what is objectively reasonable?

As I have scanned the Internet in recent days, debates concerning the legality of the Ferguson and St. Louis scenarios have often been utterly void of the actual legal measure applied by the United States Supreme Court for the past twenty-five years.

In 1989, the Supreme Court rendered a verdict in a landmark case known as Graham v. Connor, 490 U.S. 386 (1989). What the Court had to say, so far as this discussion is concerned, is that determining the reasonableness of an officer’s use of force in any case will not be based upon popular opinion, emotional appeal, or what the editor of the local newspaper thinks he knows.

Summarizing the Graham decision, police use of force expert, Attorney Ken Wallentine, writes, “First, what was the severity of the crime that the officer believed the suspect to have committed or be committing? Second, did the suspect present an immediate threat to the safety of officers or the public? Third, was the suspect actively resisting arrest or attempting to escape?”

It must be noted that the answer to any one of these questions could significantly tip the scales toward a finding of reasonableness. What a reasonable officer, of similar training and experience, facing similar facts would do is the salient legal matter that must be decided in court, not what “Monday Morning Quarterbacks” think they would have done.

According to Wallentine, in the same article, the Supreme Court also ruled that, “The calculus of reasonableness must embody allowance for the fact that police officers are often forced to make split-second judgments–in circumstances that are tense, uncertain, and rapidly evolving–about the amount of force that is necessary in a particular situation.” Perhaps most important, Wallentine writes that, according to Graham, “Use of force should be measured by what the officer knew at the scene, not by the ‘20/20 vision of hindsight’.”

In the end, every use of force case must be weighed on its own merit, and according to well-established legal principles, like those established in Graham.

The public must be informed by law enforcement professionals concerning the facts mentioned above, because, as the popular dialogue has made clear, how real police officers Observe, Orient, Decide, and Act in dangerous scenarios is not well understood.

Community leaders, to include pastors and theologians, must become familiar with the law enforcement community. I urge church leaders to attend a local Civilian Police Academy, if at all possible, in order to learn about these, and many other issues concerning law enforcement.

Much has been said about the potential for systemic abuse of members of the public by police officers, and in particular, minority community members. These concerns must be addressed, but that must be done with precision, and accuracy, as many studies and reports mitigate against some of the more wild suspicions levied against the law enforcement community in the media.

Lastly, there must be a place for honest dialogue within the Christian community about the biblical foundations upon which law enforcement rests. I have not seen it all, but in the discourse I’ve read, there has been little mention of it. The Apostle Paul, in Romans 13:1-5, spells out clear and frank instruction concerning how the church, and even non-Christians, presumably, ought to view governmental authority, and by extension, police officers.

In this chapter, Paul ominously warns that doers of evil ought to fear governing authority, teaching us, in fact, that “rulers” are God’s agents, and vessels through which his wrath may be dispensed within the scope of history toward accountable, moral people. Paul advises his audience in verse 4 that these agents do not “bear the sword in vain.” The practical applications of these words are lamentable, but necessary for life in a fallen world. As Thomas Schreiner writes in the Baker Exegetical Commentary on Romans, “Those who resist God’s ordinance will receive judgment” (p.683).

That a police officer may be acting not as a rogue villain, but sent as an agent of the living God for good ought to be our first presumption as believers, unless we factually know otherwise.

It is my sincere hope and prayer that through the recent strife, highlighted by the Ferguson and St. Louis cases, that true and lasting relational bridges might be built between police officers, and the American public they serve. This is to the glory of God, and the joy of the citizens of our neighborhoods.

The way forward must take all considerations into account, and the Church must be central to this effort.