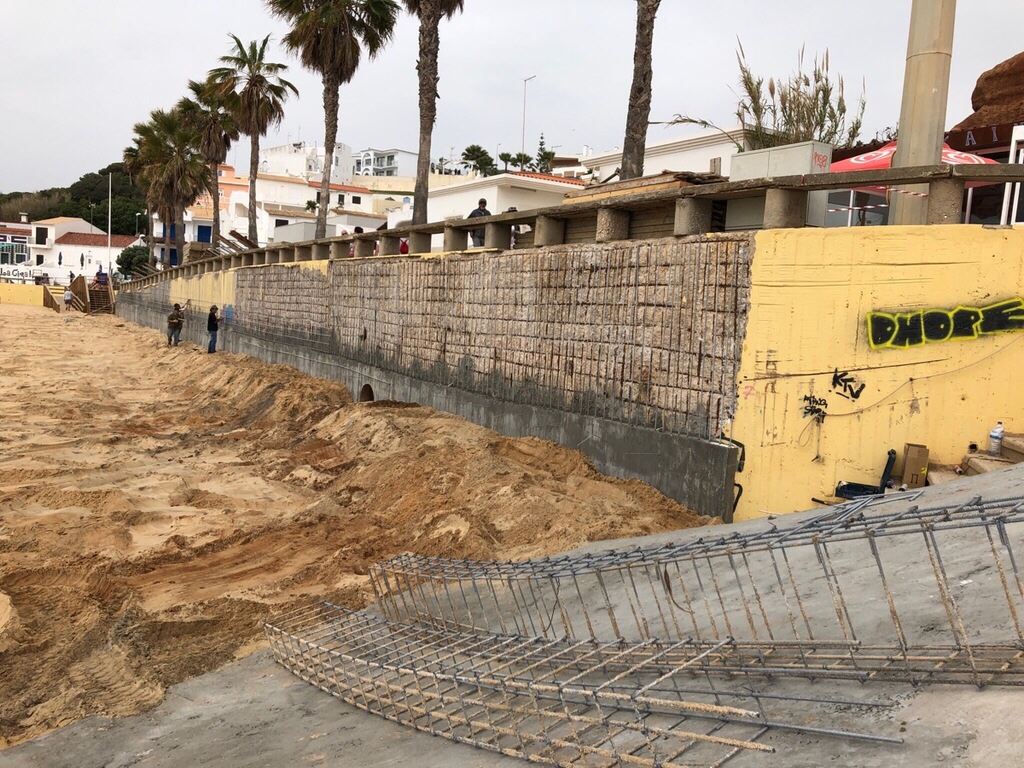 The warm immutability sounded in his voice. As sweet as soothing music. Just as trusting as his chocolate brown dog eyes. Very charming and overwhelming.

Getting off at the last bit of sunlight. Butter yellow it shines inside. Over tables occupied by chattering Portuguese gourmets. Among "us" with the villagers.

They continued to work undisturbed. The pavers in Avenida de 25 Abril. The traffic infarction in Beco dos Lopos was unbelievable and unexpected.

While enjoying a glass of vino. There is a relaxed atmosphere in the adega. At the table with grandma Rita and grandpa Dick. Everyday events are discussed while chatting.

Tap, tap, tap you heard continuously. The sand bed nicely smoothed. To restore the paving. Decorated with original Portuguese pebbles. Expertly hammered into the line. No more unevenness to be seen.

Driving straight into that little road, one after the other in a row. Looking for a parking space. Impossible there on the left in that narrow street. Complete with tables and chairs. Watched by curious eyes.

For a chat, he was in. Our taxi driver just as talkative as my hairdresser. Such a free-spirited type. With a heavy mustache and smiley. On the way he maneuvered very efficiently, super smart and agile.

More skillful than those desperately clumsy mistake parkers. In the meantime, he reveals his culinary preferences. For chicken Piri-Piri in the first place. Provided it is sharp enough and full of spicy flavor.

Only mid-March. All that wonderful weather. Nature seemed completely upset. With towering summer values. By Dutch standards that is. Remarkably warm, windless, without the slightest drop of rain.

Later on also busy workmen. Heard by the screeching sound of a circular saw. They made short work with invasive eucalyptuses.

All preparations in progress. Prior to the summer season. They are pretty good here. Professionals in the construction of retaining walls. Prevention is better than cure.

Because the rising sea level is gradually undermining the mini-promenade. These days, the ocean is becoming increasingly hungry. The advancing water appears to be uncompromising. That unstoppably devours the beach.

Locked up the crowd bewildered looking parking wanderers. Seized with panic tracing around. In vain, the other side also appeared to be blocked. By concrete benches. Carelessly scattered among waving palms.

The "taxista" showed concern. About unhealthy habits. Like the pleasures of his wife, a chain smoker. Depended on red wine. Confidently, he bowed aside and admitted it frantically.

He turned out to be not short of a drink. Apart from smoking. A disgusting habit. That woman unable to kick this addiction. He looked upset with his mouth squeezed. And a deep wrinkle of disapproval on his forehead.

As if the traffic indigestion would resolve itself. Well, there are plenty of parking spaces. At the top of the village. Oh well, Portuguese drivers and have to walk a bit. Cross parkingers caught in a trap.

Then back again, backwards. Because reversing that is really not going to work here. It took a while before they got it. An encouraging applause was heard from the terrace. The pavers ticked off unmoved every second.

He was proud of his language skills. Rattling all the way in rap Portuguese. Punctured with supporting English phrases. Poorly pronounced.

Incidentally, half intelligible due to traffic noise. From short, nasty bursts. Of accelerating and braking cars. When I got out he pushed it towards me. That thumbed business card.

A handwritten telephone number. Carelessly chalked on it. Obrigado driver, boa noite and goodbye. Must be a handyman with a solid rate. Not unlikely. Forgivable, done and dusted. Due to the safe ride, moreover entertaining.