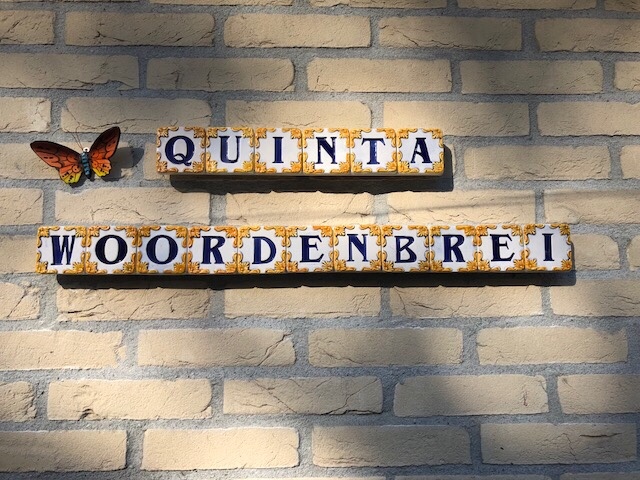 Again and again passing. Constantly, quinta this and that. Countless versions. Pronounce: kientuh... invariably that word. Followed by a name, intriguing. But incomprehensible.

Certainly not clear. Distinctive on that stone pillar next to the entrance gate. From that estate and winery. Similar to the French concept of 'château'.

Even on little white dollhouses, scattered here and there. As if a giant has carelessly discarded them. Over the flanks of the Serra de Monchique, as spreaded sweets. Cinematic images of a fascinating panorama. Projected on the car window.

On the way to the rugged Portuguese west coast. Dominated by fear of heights like headlands. Whimsically worn out, plagued by wild sea currents. Gently descending to the water.

You get there via steep rough wooden stairs, which cool their feet. At high tide in the impetuous Atlantic. A cozy village square. Arrived on this pleasant terrace.

For the best port and the tastiest Vinho Verde. With a melancholic sounding Fado in the background. Further on a long wooden table. Fully loaded with a banquet.

Older men behind plates. Full of fresh sardines, rice and meat. Throwing themselves on them, without any hesitation. After gorging they return to the village square. With full stomach and greasy lips, strolling along.

There they take their permanent place again. On the benches in the shade of the whitewashed church. Rota Vicentina, that's the name of a network of walking routes in these regions. Increasing popularity in recent years.

Especially in spring and autumn. At least, if it is still reasonably cool. No fun to walk in the heat. Especially during the summer months. A bunch of weary walkers settle down.

For a well-deserved break. After defying the sandy, unpaved and dusty road. Which winds through the landscape like a gigantic anaconda.

Kilometers long is the former pilgrimage route. Between Cabo San Vicente and Santiago do Cacém. Actually still quite quiet here. No hordes of tourists, though be careful.

Because in August the Portuguese celebrate holidays. They are giggling at the table across the terrace. Two anorectic early twenties from top to bottom radiating muesli. Girls with lanky androgynous limbs.

The menu does not seem really hilarious. Finally, questionable faces. Maybe nothing can charm them. It just comes to mind. Well, it seems clear to me.

If you do not know a word of Portuguese, you will be the sucker. The staff does not speak a word across the border. Menus in English, German or French. Apparently this manager does not even think about it.

Logically that the confusion strikes. Without the faintest idea what it says. Powerless to interpret Portuguese word combinations. Incomprehensible such a vocabulary, which comes across as pure abracadabra.

Pitiful that two girls. Their body language speaks volumes. Taking a look inside. In the Igreja... iegrezje as they say here. Mediterranean sunlight falls down through the stained glass.

In the high-rise gothic windows. Supported by curved ornaments. Saving a pious look. Up to heaven. It forms multicolored kaleidoscopic patterns on the stone floor.

Suddenly the thought strikes me, looking around this God house. As if the building took me apart. To whisper something to me. With an urgent tone in one of those dark corners.

Apparently it does not make much difference. Various names for one and the same concept. House, residence or accommodation. A building to live in: 'habitação'. Some names look a bit more stylish than other.

Just as often you see 'vivenda' or 'casa'. "Home is where the heart is", says a British proverb. In Portuguese: "A nossa casa é onde está o coração". Nothing special I think. Just common ... quinta.