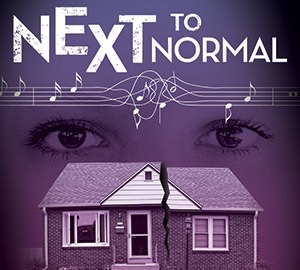 Next to Normal at Runaway Stage Productions

Next to Normal was performed by Runaway Stage Productions at the Black Box Theatre in West Sacramento. I attended yesterday, rolling/walking all the way over, which was tiring but worthwhile. Andrea Thorpe as Diana was the strongest actor, giving both the voice and the emotion to the part. The other voices and actors were good. This play is draining, but also cathartic. Though this is now the third time I’ve seen it (Broadway traveling show at SHN, and New Helvetia Theatre) and the key surprise is no longer a surprise, I still find it a compelling play, and the music sticks with me long afterwards.

I appreciate Runaway Stage tackling this intensely emotional musical, a change from their usual fare of fluff traditional musicals. The Black Box is small, but it was far from full. The productions at the 24th Street Theatre are almost always full or nearly, and I suspect the difference is that their usual audience just isn’t interested in challenging plays.