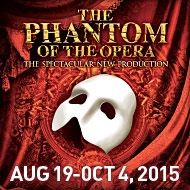 This is my first time seeing Phantom, probably the last theatre fan in the world to see it. Well, hmm. It was spectacular. The rotating stage cylinder device was an interesting solution to quick scene changes, as the next scene could be set while the previous one was going on, but I found it very distracting. Webber's music and lyrics are great is a few instances, but mostly very forgettable. Though admittedly not knowing the story may have handicapped my understanding, I never had any insight into the motivations of the Phantom or of Christine. I was amazed to read the claim in the playbill that this is the most popular theatre soundtrack ever, as I can think of so many so much better. Bombastic is a word that kept coming to mind. I'm glad I saw it, but it is not on my list of things to see again.

Since I saw two plays in one day, this and Company at SF Playhouse, it is worth comparing the two experiences. Company was far superior. I think part of of it is the semi-professional actors who put more effort into it, inhabiting their characters rather than just performing. The voices in Phantom are top of the line national quality, but without much real emotion, whereas the voices of Company are regional quality and imbued with passion. Even if Company is, as I said, a little silly and dated, it is more real. Bill English is passionate about the plays being put on making a difference, calling it emotional gym, and I think they largely do accomplish that end.