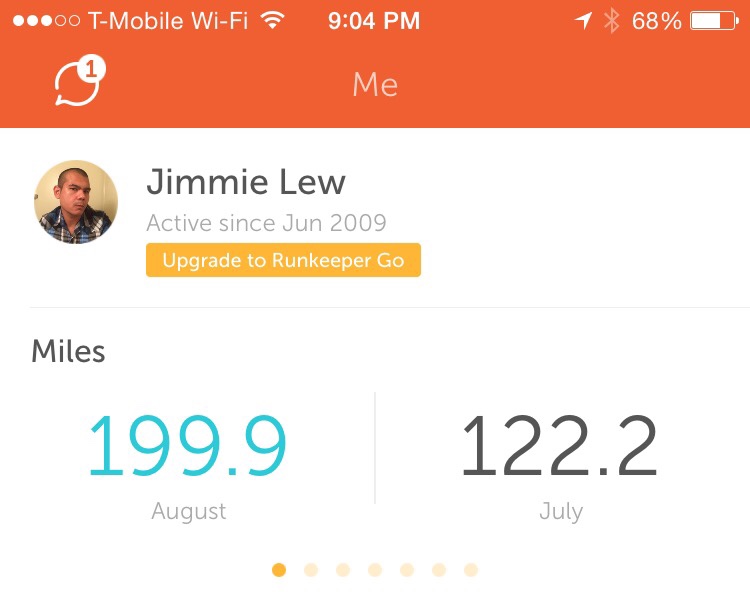 Tracking my activity on RunKeeper, my goal for the month was to simply keep pace with the previous one, maybe add on a few bonus miles.

Almost two weeks ago when I started adding body weight and arm/core workouts to the mix, I checked the reports and saw that I was already well enough over that goal, and much closer towards one I wouldn't have ever imagined myself taking on: putting in 200 miles traveled on foot over the course of a single month.

For the past week and a half, I've been pushing past the pain, first from the soreness of the other workouts, and more recently, the one in my legs for suddenly ramping my normal daily activity from 5 to 8-10 miles.

This last run, I had real hesitation on doing. I was very serious when I status updated

I feel legitimately concerned about what I'm putting my body through. Feels like my right side is ready to seize up from just walking, and like I'm aware of hip/muscles only old folks get really familiar with.

And though it did take a lot of constant self-coaching (some of it even humorous) to push through it, I still managed. And even though my body felt ready to be done and get some well earned rest, it also felt ready to keep going and take on more punishment at however lame a pace it would be.

I tried to stop my tracker to get it right at 200, but comically missed the mark by just a bit. That's over 200 miles walked, hiked, and (largely) run —there were a few that went half-logged or unlogged altogether thanks to iOS update glitches — all in the month of August. Less than a handful would be needed to count the days I didn't go running this month.

Now, time to turn this thing back on and walk down the street to get myself a reward burrito and fully over the 200 mile mark while it's still not September yet.