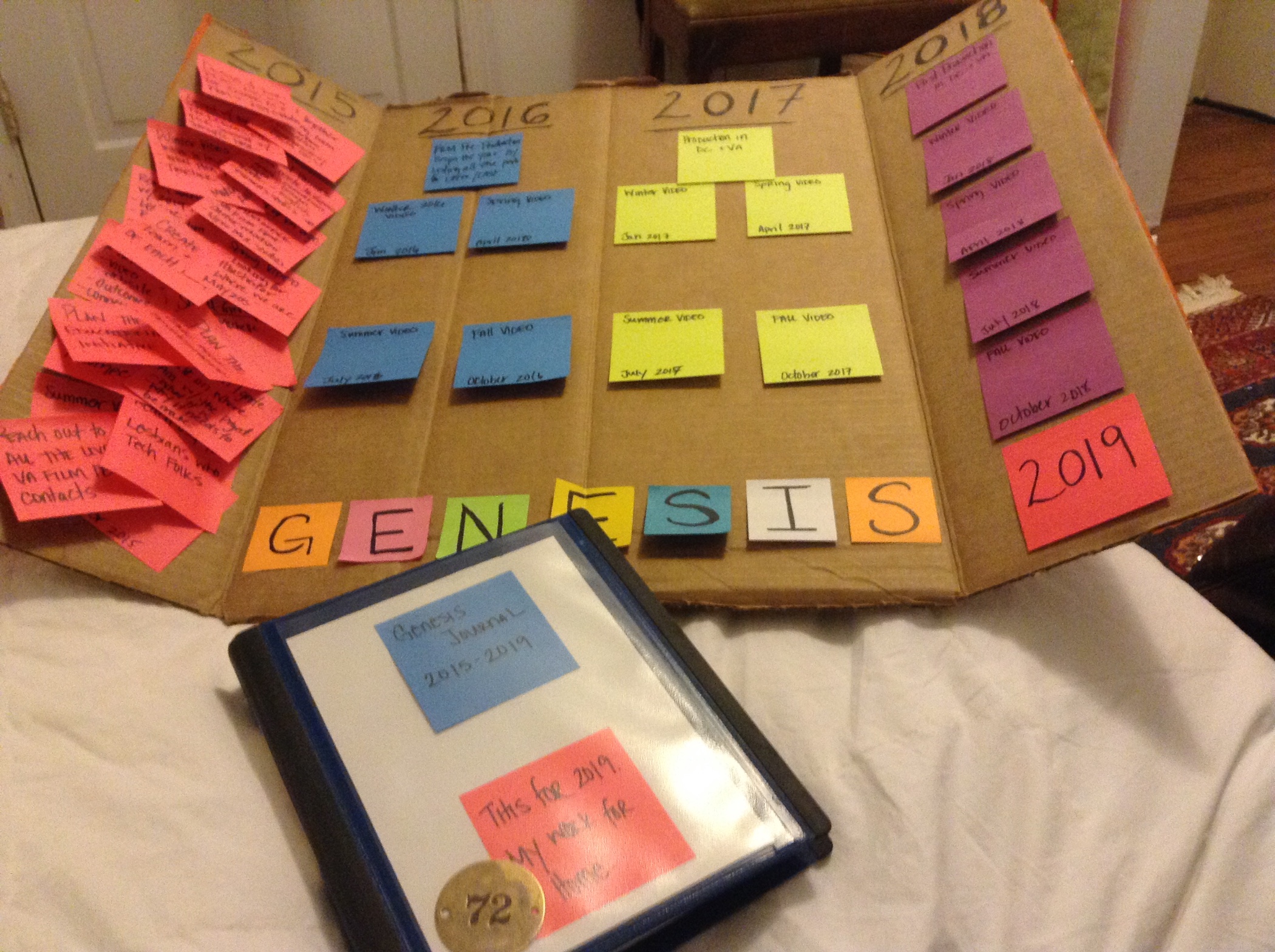 2019 "Genesis" premiere AND the 400 Year Anniversary of Africans in America.

Today was a great use of a Cville Snow Day!

I awoke to a cloudy, rainy hometown with the temperature steady falling. There was no fresh snow on the ground but everything on the east coast was shutting down and canceling, including my bus back to DC. Thankfully, Prince George's Community College also closed today but I wasn't going anywhere.

SO...with the snow fast approaching, I returned to my Corey Jo's house and slipped back into my pajamas. Starr Hill Girl and I had coffee and chips and began the "pow wow"...the "Genesis Pow Wow." And it was glorious. We spent the morning cultivating a grand idea that will soon become a plan of action to be achieved over the next four years...all leading to a 2019 "Genesis" premiere AND the 400 Year Anniversary of Africans in America.

Here's how the next four years will be structured:

2015: The Plotting and Planning Year. This will be the year a small team of organizers will construct the three "Genesis" areas of focus: Production, Education, and Celebration. Production will focus on what is required to produce the film and the marketing needs to promote the film. This is about cultivating the relationships and the resources to ensure a COMPLETE project. Education will focus on bridging the themes of the film/script/story to course and programs at schools, K-12 and higher education. The education team will create events and participate in discussions around the humanities/social change/black history/etc as they connect to the story, "Genesis". Celebration will focus on connecting "Genesis" to the events of 2019 and the 400 Year Anniversary of Africans in America. Making sure "Genesis" the film is ready for premiere by August 2019. This will be a "once in a lifetime"opportunity for every American to consider a history of a people who built this country one brick at a time. This will be my contribution to the commemoration of a great people: Black Americans.

2016: The Pre-Production Year. This will be the year to established the full production team for the film. This will be crucial year to select the cast, crew, and all who will work on the film. The Genesis Comic Book will be published and available for sale and to be given to as many who want to see NEW AMERICAN SUPERHEROES.

2017: The Production Year. This will be the year the cameras begin rolling, once and for all. Once...and for ALL.

2018: The Post-Production Year. This will be the year the post production team takes over the footage shot in production and finish the film. The marketing team will continue to work with the Education and the Celebration teams to promote the film and prime it for a successful 2019.

2019: The Premiere Speaks for itself.

This is just the beginning of the overall plan of action. More will come.

Now...let me get some sleep and hopefully I'll get home tomorrow.