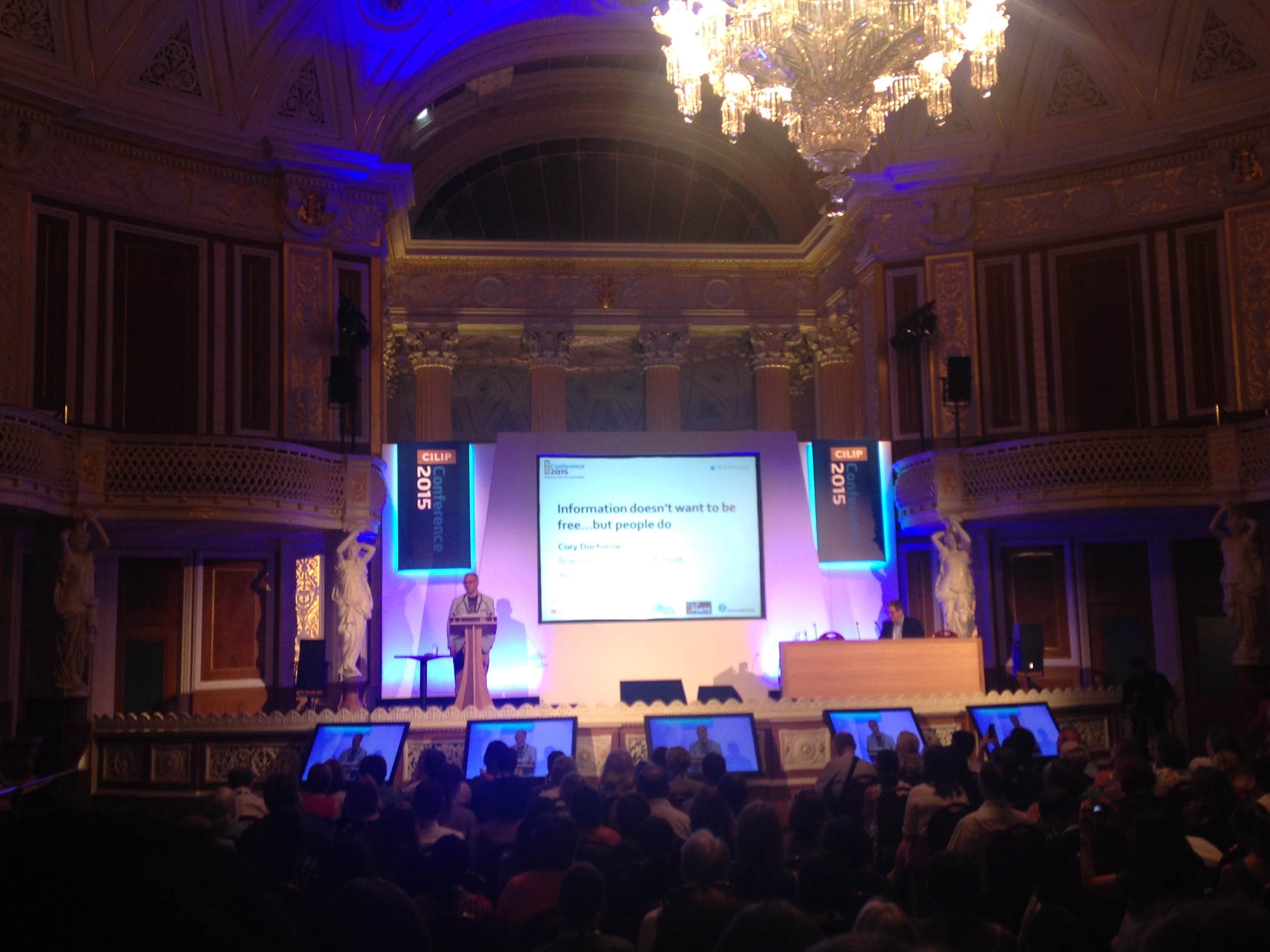 Cory Doctorow Information doesn't want to be free ... but people do

Discussing working in the arts and how we lionise the small percentage who are lucky enough to be successful. By defending business models we fix that luck. Instead, regardless of the business model that comes along, the first cut should go to artists who produce the art we love, the second cut goes to publishers and distributors and the third cut to platforms.

If someone puts a lock on something of yours and doesn't give you the key, it's likely not for your benefit.

Digital Rights Management (DRM) doesn't work. Back to Alice and Bob, who trust each other, and evil Carol, who wants to intercept their messages, for a cryptography primer.

Our messages are mediated over ever more public media. There are a lot of potential Carols.

2. They assume Carol knows how they scrambled the message

In fact they tell people how they scrambled the message. We publish our security ciphers because it's better if these are widely scrutinised.

3. Without a key the message can never be deciphered.

We can make messages that are extremely secret even though people have a copy of the message and know how it was encrypted.

DRM doesn't have a Carol

DRM has an Alice and Bob. The key is hidden in a safe that is sent to pirates. Digital locks are broken very easily. They are broken in an afternoon by bored teenaged.

Digital Locks are Protected in Law

They are weak but legislation criminalises the breaking of digital locks. That it's illegal isn't a great deterrent.

But the law prohibits removing the lock unless you put the lock on. This isn't necessarily the copyright holder. The consumer becomes bonded to the lock keeper. The vendor that defends your work in the name of defending you against piracy takes control of your customers/audience and reduces your negotiating leverage.

Obscurity is more of a risk than privacy. Visibility, and payment brokering, increasingly depend on the Internet. Some artists are using these services directly and becoming very successful as independents. They stay independent or they have a strong negotiating position with vendors. They are few.

Nevertheless the fact that the independent sector exists is important for a lot of artist's careers. The concentration and convergence in the publishing industry reduces the competition for artist works and their negotiating position. The thriving independent sector acts as a check against standard deals as publishers have to compete not just against other vendors but the best the artist could do by themselves.

Big publishers and platforms have waged war on intermediaries arguing they encourage piracy and demand they have compliance systems. As this shrinks the alternatives again competition is reduced (for example the emergence of a new YouTube). The new boss becomes the same as the old boss when there is less competition.

The reality is none of these things have done anything to reduce piracy. That it hasn't worked is given as proof we need to do more of it.

Information doesn't want to be free

All information wants is for us to stop anthropomorphising it. It's an abstraction.

The Internet is the nervous system for the 21st century.

The real cost of DRM is not what it does to artists or audiences or even libraries. Digital protection criminalises scrutiny of systems that we rely on for increasing aspects of our life. Our phone knows an awful lot about our life and our movements. Security is a process not a product and vulnerabilities cannot be exposed if discovered in phones because of DRM liability.

Devices have become a source of digital pathogens that can attack you in a number of ways. It's not just phones but cars, medical instruments, buildings. Example given of how implanted defibrillators can be compromised to deliver a lethal shock but not before it has located and infected other nearby pacemakers. 40% of the code in medical instruments had never been audited because they are protected by a thin layer of DRM that prohibits circumvention.

Momentous moments are what emerge from the mulch of less meaningful social interaction: social hummus.

The Internet improves every single outcome we value as a society. Yet the Digital Economy Bill made it law that if you live I a house where a networking devices is accused of three copyright infringements, that household will be disconnected from the Internet.