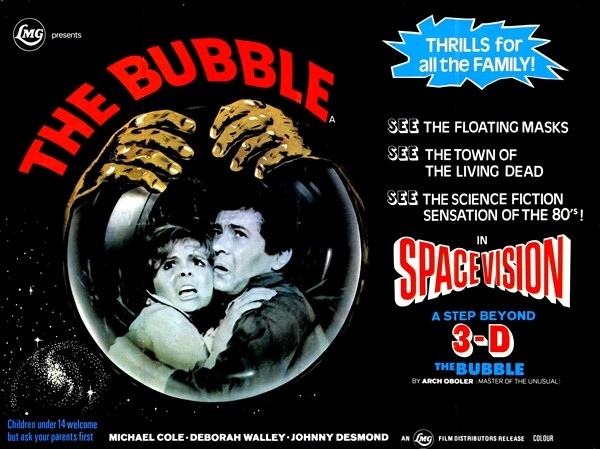 This evening, I went over to my dad’s house to watch a 1966 movie called The Bubble.

The Plot (From Wikipedia): A young couple, Mark and Katherine, are traveling on a small airplane and are forced to land in a remote town where the people are behaving oddly. They then attempt to escape from the town, but discover that there is a giant glass-like force field bubble around it that prevents anyone from leaving.

The movie was pretty entertaining all the way up to the end. However, the way the movie did end, kind of left you hanging.

However, it was cool to watch this movie for it’s historical place in 3D film history.

From WikiPedia: The Bubble marked the introduction of the economical Space-Vision 3-D system. Unlike the two-camera, two-projector systems used to make and show the 3-D feature films of the 1950s, Space-Vision used a single ordinary movie camera with an external optical attachment that allowed it to simultaneously photograph the left-eye and right-eye views stacked in an "over-and-under" configuration on a single frame of film. Because each image was only half the standard height, this resulted in a widescreen aspect ratio with roughly the same proportions as CinemaScope. A special attachment on the projector allowed the two images to be projected through oppositely-oriented polarizing filters and superimposed on a screen provided with a special non-depolarizing surface. As with the feature-length 3-D films of the 1950s, the audience had to wear Polaroid-type 3-D glasses so that each eye would see only the image intended for it.

Most of all, I enjoyed the time spent with my dad.